Today, Canpotex Limited (Canpotex), Canadian Pacific (CP), and the City of Saskatoon (City)  announced the funding support for the new Canpotex Train, which will be one of the main attractions at the future home of PotashCorp Playland at Kinsmen Park.  “The Train is a major attraction to the Park,” notes Steve Dechka, Canpotex’s President and Chief Executive Officer, “and Canpotex, along with our partner CP, is excited to help the City of Saskatoon cultivate this experience for Saskatoon’s children, families, and visitors at this important landmark.”

Groundwork for the train began in April and will continue throughout the summer. The train is currently being constructed at Arizona Railroad Depot in Phoenix, Arizona, and is scheduled for delivery in early 2015. 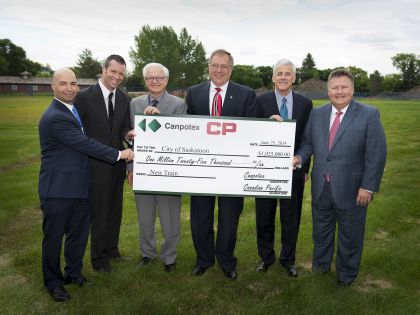 The Canpotex Train will be a replica of a CP Train, complete with a one-third scale locomotive and caboose, and spacious seating for 44 adults or 66 children.  It will travel at a speed of approximately 8 kilometres per hour along the new 626 metre loop (176 metres longer than the previous one), completing a full loop in roughly five minutes.

“I want to offer my gratitude and thanks to Canpotex and CP for their commitment to the people of Saskatoon,” said Mayor Donald Atchison. “The Canpotex Train at PotashCorp Playland will draw families from all over the Saskatoon region to this historic neighbourhood and improve the quality of life in City Park and the entire community.”

The Future Home of PotashCorp Playland at Kinsmen Park is scheduled to open to the public in Spring 2015. Details on the project’s progress can be found at and video updates are available on the City’s YouTube channel.